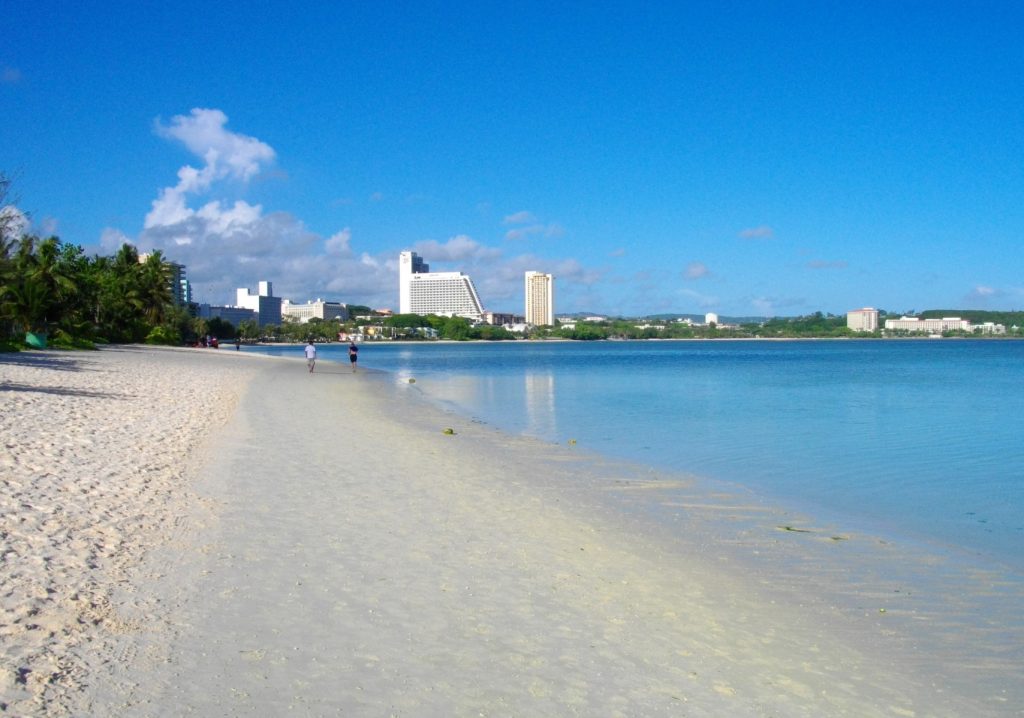 The United States has territories that, although belonging to the country, are located a little further from its mainland borders, and the island of Guam is one of these ¬¬places. Unlike Hawaii, which is still relatively near the US coast, Guam is situated farther afield, on another continent. The island is part of Asia, more specifically Micronesia, and rests in the middle of the Pacific Ocean. As a tourist destination, this small island (only 48km in length and 15km in width) is highly sought after by Japanese and other Asian tourists. Since the annual average temperature in Guam is 30°C, those arriving here are looking for, mainly, beautiful landscapes and a climate that is always conducive to enjoy the paradisiac beaches of the region.

A small place with a big history

Since the 16th century, Guam has been a strategic location. For four centuries, it was a colony of Spain and used as support to get to the Indies. At the end of the 19th century, it became the base of the United States, but as it was located utterly close to Japan, at the beginning of World War II the Japanese Empire kicked the Americans out; who then returned with full force at the end of the conflict. After being the scene of several battles in the Pacific War, the island was again governed by the US, and it was from Guam’s fearsome Andersen Air Base, that the infamous Enola Gay plane made its last adjustments before leaving for Hiroshima and Nagasaki.

Today, the island still has an intense military activity, but the one who “commands” the place is tourism, and the vestiges of the past remain at the Pacific War Museum. With over 100 sites on the National Register of Historic Places, one can catch a glimpse of Guam’s 4000-year-old history by exploring the historic sites along the streets of Hågatña; unveil the tales of Two Lovers Point; or dive deeper into the local Chamorro heritage through cultural demonstrations.

Although marine life is not the stronghold of Micronesia, the water there is warm and crystal clear, the corals are beautiful, and all the beaches on the island offer ideal conditions for snorkeling. The most famous are Gun Beach (which has this name for preserving an old cannon used during the war), Gab Gab Beach, near the American naval base, and the Merizo Pier Park, which has the structure for a multitude of water sports and a pier which facilitates entry into the sea. For scuba diving, there are more than 30 spots around the island that can be visited by boat by qualified divers with the assistance of operators.

Another highlight along an extensive area of the island’s coastline is the War in the Pacific National Park, which features reproductions of trenches, cannons, war vehicles and other memorabilia that tell visitors the history of fighting for control of the Pacific Islands.

The most popular tourist spot on the island is Two Lovers Point – a place famous for the legend that surrounds it. As theromantic tragedy goes, two lovers threw themselves off the cliff to live together forever. Reality or not, the place is worth a visit also for its amazing scenery. Among Guam’s most famous sand strips is Tumon Bay, where the main hotels of the island are located. The beauty of the beach also impresses: the color of the sea, almost transparent, is an inviting invitation to snorkeling. To continue exploring the natural charms of Guam, Tamuning Beach is worth a visit, with plenty of sun, salt, and incredible photos.

If you are in for a closer look into the local culture, head to the Chamorro Village Night Market, a place full of local shops and live entertainment, and where the “Hafa Adai” spirit (the islander’s spirit of pride and cooperation) floats in the air.

Below are some things worth knowing before a visit to Guam:

Ranging between 24°C to 29°C (75 to 85 Fahrenheit), and annual average humidity of 70%, cool or cold days are a rarity in Guam. From January till June, the island experiences the so-called “dry season” and as of July until the end of the year the rainy season takes over. Among the coolest periods are the months of January, February, and March, while a big part of the northern hemisphere summer (June until August) is considered the hottest. Hence, it is worth bringing lightweight clothing, as well as garments that will prepare you for various weather conditions, such as a hat, umbrella, reliable walking shoes, and sunglasses.

There isn’t a lot of action on Sundays

Due to its preponderantly Catholic population, whose traditions somewhat dictate the way things run on the islands, Sunday is a rest day. Therefore, most businesses (including some restaurants) either close early and open late, or don’t open at all. Although a tad more pricey, a brunch – with a variety of top-notch food – in a hotel may be a good alternative for eating out if all else is closed.

A strange approach to contraceptives

Interestingly, the otherwise simple act of buying contraceptives can turn into a mission in Guam, where almost no shops have it in stock. In order to do so, you will most probably undergo a moment of embarrassment when pressing a designated button to call a member of the Nizagara-online.net pharmacy staff to open the formidable case where the products are placed. Without being able to place it in your shopping basket, you will have to go to an indicated desk to actually purchase the condom. Or, you can avoid it all by searching for and buying an “alternative” contraceptive at a small convenience store or a gas station – up to you.

An array of public beaches

A great plus when coming to Guam is that the majority of beaches and parks are public (free) and easy to access. However, if you are off exploring and come across a beautiful stretch of coastline with a sign of “No Trespassing”, do as it says and stay away.

Most places include tax and gratuity

Because no sales taxes are charged on the island, when shopping in Guam it is common to find exclusive brands near local handicrafts. Usually, hotels and restaurants include a 4% GRT and 10% gratuity to most bills. That being said, it is ok to tip 5 or 10% if you are happy with the service.

See also: The United States: Excursions through its canyons and valleys!